I had a pretty strange experience this weekend. Adam and Nici thought it would be a good idea to get some JETs together and sing some Christmas carols, and they decided that the old folks' home in Ota would be an ideal place. I agreed to come along, and on Sunday eight of us drove up to the hundred yen shop (the equivalent of a pound shop, but cheaper) to buy tinsel and Santa hats, complete with frightening beards. 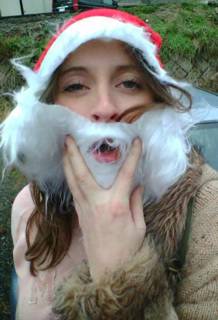 We quickly decided the beards were a bad idea, but stuck with the hats and tinsel. Despite the fact that none of us had practiced any of the songs we were going to sing, we were ready to go.

The old folks' home took my breath away. And not just because of the heavy stench of antiseptic cream. These people were old. I mean really old. I know Japan has the longest life expectancy in the world, but nothing had prepared me for this. There was a sort of Christmas variety show going on as we arrived, but it was more like a rehearsal for The League of Gentlemen. Three women in wheelchairs, all wearing dressing gowns, were on the stage, each with a cartoon drawing of an animal stuck on a cardboard hat. Each woman was being moved into place by an orderly, but none of the women were moving or speaking, they were just sitting there. And they were old. I mean scarily old. I took a good long while to stare at them each in turn, just to make sure that they were actually alive. Then another woman, her spine bent nearly to the floor, walked onto the stage with a cardboard box strapped onto her back. The orderly helped her off with the box, which she then opened. Inside was a plastic snake which she waved around, to groans and laughs from the audience. Then it ended. And it was one of the strangest things I've ever seen.

Obviously, following a stage performance like that was going to be tricky, but I think we pulled it off. In fact, one woman was even crying during Silent Night, although I don't know whether or not that was because none of us could hit the high notes. Judging from the grins and applause coming from the audience though, I think we went down well, and it was a good feeling to bring them a little Christmas cheer. The manager even gave us a huge box of oranges as a present, which we didn't really feel we could accept (after all, we only sang four songs) but it would have been incredibly rude to turn it down, so we took it anyway.

I still can't get the image of those old people out of my head though. I used to help out in an old peoples' home when I was at school, so I'm used to seeing the elderly, but I've never seen people who are quite as ancient as that. Japan may have the longest life expectancy, but is it really worth it? Would you really want to end up in a home, barely able to move or speak, yet being wheeled around by an orderly in some bizarre stage play? The idea of "live fast, die young" is starting to sound more and more appealing. Perhaps I should buy myself a motorbike for Christmas..... 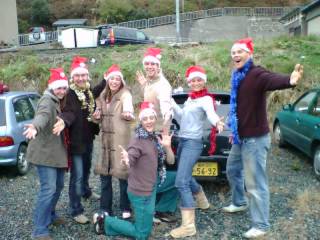 LOL, loved the energy of the site.

I would be encouraged by any reviews of my site; if you could - I'm new to Blogging and am asking people to review my story as well...

Thanks and Merry Xmas! Happy YULE!

Lewis
In 2004, a few years after university, I decided to sign up for the JET programme, and I became an assistant English teacher in Fukui, a prefecture on the west coast of Japan. I taught there for two years before returning to London, where I now work in publishing.